Photo taken at the lock down at Tataskweyak Cree Nation on May 18, 2020.

To view this media release as a PDF document, please click here. 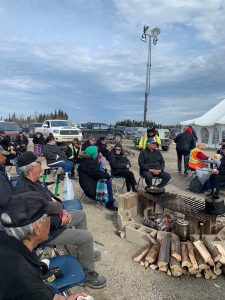 Elders at the lock down at Tataskweyak Cree Nation on May 18, 2020

MKO First Nations have been expressing concerns about Manitoba Hydro’s plans for the Keeyask construction site since March 2020. Manitoba Hydro plans to implement a shift transition starting today, May 19, when 700 current employees at Keeyask will be allowed to leave the site to return home. Manitoba Hydro is starting to bring in up to 1200 new workers to the site. Staff will come from various parts of Canada and the United States, including regions hit hard by COVID-19 such as Quebec, Ontario, and British Columbia.

The Tataskweyak Cree Nation, a community of 2500 people, announced on May 14 that it planned to shut down the PR #280 and enforce a lock down with the aim of stopping the spread of the COVID-19 virus to their community. The First Nation is also blocking the main gate and north access point to Keeyask. On May 18, Manitoba Hydro served the Tataskweyak Cree Nation with an injunction to end the community’s blockade of PR #280.

The Fox Lake Cree Nation has also issued a State of Emergency and enforced a lock down of the community. Fox Lake Cree Nation is restricting access to Keeyask on the South Access Road until Manitoba Hydro properly addresses community concerns about the risk to communities and the safety of their people during the COVID-19 pandemic.

“Corporate interests do not trump the safety of First Nations peoples in Northern Manitoba,” shared MKO Grand Chief Garrison Settee. “As leaders, our role is to protect our people, this is our foundational concern. The provincial government deems the Keeyask construction site as essential, critical infrastructure and yet this construction site is not providing any hydro-electric power at this point so it doesn’t make sense that it’s deemed as essential. MKO asserts that the Keeyask project be classified as being non-essential infrastructure at this time.”

“Other jurisdictions have placed resource development projects on hold until the risk of COVID-19 passes. We are urging the Province of Manitoba to place this construction site into ‘care and maintenance mode.’ First Nations have undertaken many actions to restrict the transmission of COVID-19, including closing our borders to ensure our communities are safe. We urge the province to do their utmost to protect our people as well,” stated Chief Doreen Spence of the Tataskweyak Cree Nation.

“By allowing over one thousand people to travel to Northern Manitoba, the actions undertaken by Manitoba Hydro are inconsistent and contradict public health orders shared by the Province of Manitoba,” stated Chief Betsy Kennedy of War Lake First Nation. “The 1000 plus people are coming from Manitoba, as well as numerous jurisdictions across Canada and the United States. We are told that the workers coming to Northern Manitoba are asked to self-isolate for 14 days in their home province prior to travel. How do we know these people are truly self-isolating? There is no way we can actually know this as Manitoba Hydro has not shared information on how self-isolation is being monitored, if at all. Also, workers from other provinces will be tested for COVID-19 upon arriving in Winnipeg and, if negative, will be allowed to immediately travel north to start working. If a worker was infected during travel to Winnipeg, the COVID-19 test is not sufficiently sensitive to identify infection after such a short incubation period. It is noteworthy that, unlike workers from other provinces, all Manitobans returning from out of province must isolate here for 14 days following travel.”

“As First Nations leaders, we are extremely frustrated,” said Chief Leroy Constant of York Factory First Nation. “We have been discussing these issues for weeks, but it seems that our partners at Manitoba Hydro are not interested in hearing our concerns. This is not how a partnership is supposed to operate. We have raised the issue of putting Keeyask into ‘care and maintenance mode,’ which would mean the operation is reduced to 250 workers without advancing construction. If Manitoba Hydro was to reduce the number of people working at the project while we come to terms with this pandemic, it would show respect for the concerns we have for our people’s health and wellness.”

“We are calling on the CEO of Manitoba Hydro to meet with the four First Nations that are supposed to be partners in the Keeyask construction project,” shared Chief Billy Beardy of the Fox Lake Cree Nation. “Despite multiple and ongoing calls for action, Manitoba Hydro continues to ignore the concerns expressed by First Nations. This is a flagrant violation of how they should be carrying out a mutually respectful and cooperative partnership. We absolutely should be working together in the best interests of the people who call Northern Manitoba home since time immemorial.”

To view a media release from Keewatin Tribal Council on this matter, please click here.