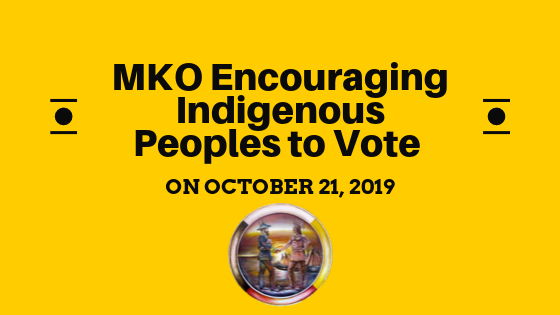 Treaty One Territory, Winnipeg, MB – Manitoba Keewatinowi Okimakanak Inc. (MKO) is encouraging Indigenous peoples across the Province of Manitoba to vote in the federal election scheduled to take place on Monday, October 21, 2019.

“I am encouraging all Indigenous peoples across the province to get out and exercise their right to vote on October 21,” stated Grand Chief Garrison Settee. “If you are 18 years old and a resident of Manitoba, it is your Constitutional right and your civic duty to vote. Get involved simply by getting to a polling station on Monday, October 21. If you’ve never voted before, ask a friend or family member to join you and head to the polling station together to cast your ballots. Voting is a free opportunity to make a difference—your voice matters so get out and vote!”

MKO will continue to advocate for 26 Northern First Nations regardless of who is elected on October 21.

MKO has created a webpage to provide clear information on how to vote in the upcoming election.

Listen to Grand Chief Settee explain why he believes voting is so important: