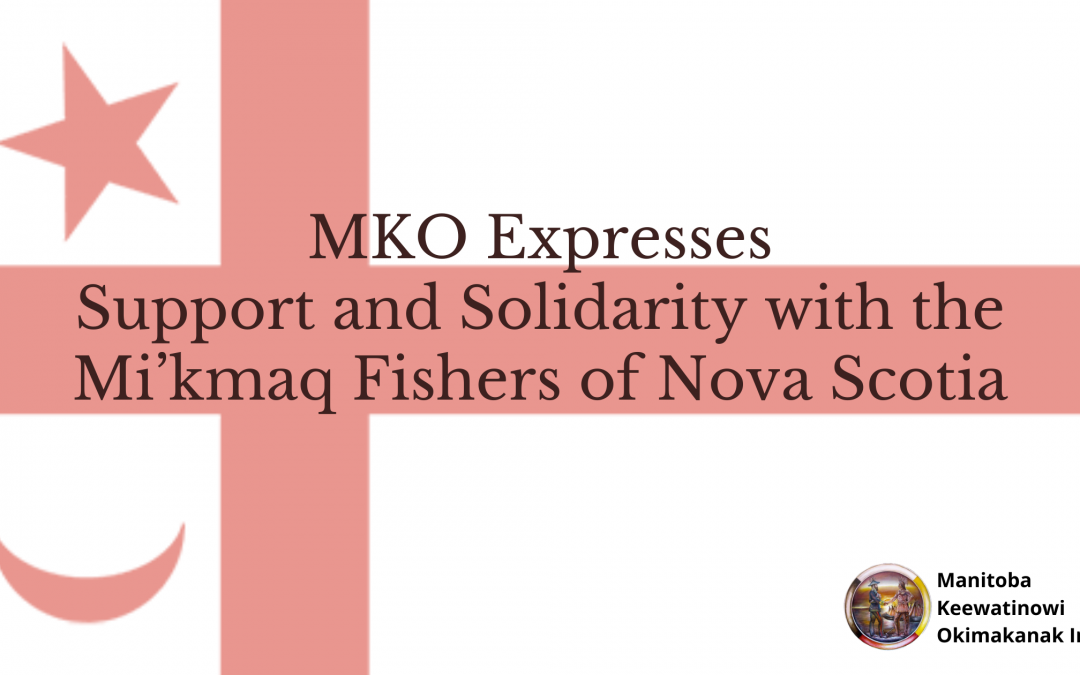 Treaty Five Territory, Thompson, MB – Manitoba Keewatinowi Okimakanak (MKO) Inc. Grand Chief Garrison Settee is issuing this statement to express his support and solidarity with the Mi’kmaq of Nova Scotia in their struggle to maintain their Aboriginal fishing rights. He is also condemning the harassment and criminal acts perpetuated upon them by the settler fishers of Nova Scotia.

“It is very disturbing to hear of and witness the criminal acts towards Mi’kmaq fishers in Nova Scotia. Part of the problem is the governments of Canada and Nova Scotia are not intervening to enforce the Supreme Court Marshall decision that affirmed a Treaty right to fish by the Mi’kmaq people. The Mi’kmaq people have always had the Aboriginal right to fish as affirmed by their Treaty with the British Crown of 1752. The Aboriginal rights of the Mi’kmaq people pre-dates the Treaty as it is based upon the occupation of the land by the Mi’kmaq people over thousands of years prior to the coming of the Europeans onto the shores of Turtle Island,” stated Grand Chief Settee. “Present day settler descendants need to realize the historical nature of the Mi’kmaq right to fish as affirmed and recognized by section 35 of the Constitution Act, 1982. It is actually the Mi’kmaq people that accommodate the settler’s legislative right to fish because the Mi’kmaq’s Creator-given rights supersede those of settler legislative rights. It is incumbent upon the governments of Canada and Nova Scotia to enforce the rule of law as set out by the Marshall decision and the Constitution of Canada.”

The Supreme Court of Canada’s September 17, 1999, decision in the Donald Marshall case affirmed a Treaty right to hunt, fish, and gather in pursuit of a ‘moderate livelihood’, arising out of the Peace and Friendship Treaties of 1760 and 1761. The decision affected 34 Mi’kmaq and Maliseet First Nations in New Brunswick, Prince Edward Island, Nova Scotia, and the Gaspé region of Quebec.

Over the past few days, media outlets and videos on social media have shown the violent clashes between the Mi’kmaq people and non-Aboriginal settler fishers of the lobster fishery. Criticism has been leveled at the RCMP for not enforcing the rule of law to enable the continuation of the Mi’kmaq fishery.

“On behalf of MKO, I am expressing my support and solidarity with our Mi’kmaq brothers and sisters of Nova Scotia,” stated Grand Chief Settee, “We have a common interest in the fisheries of these waters, within and on the shores of this continent, through our inherent Creator-given rights. I call on the governments of Canada and Nova Scotia to intervene to enable the Mi’kmaq to access and harvest their traditional lobster fishery in a safe and secure manner.”