MKO Sends Condolences to the Family of Joyce Echaquan: Action Needed Now to Protect the Lives of Indigenous Peoples Across Canada 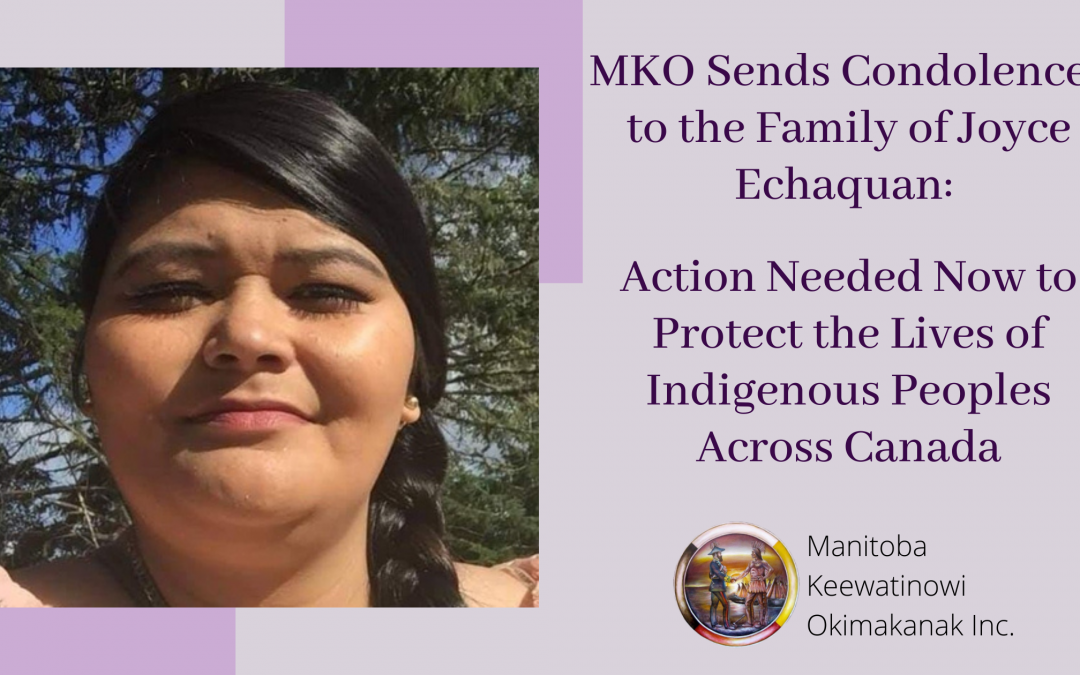 Photo courtesy of Karine Echaquan via the Montreal Gazette. To view this media release in a PDF format, please click here.

Treaty Five Territory, Thompson, MB – Manitoba Keewatinowi Okimakanak (MKO) Inc. is sending condolences to the family and loved ones of Joyce Echaquan, a mother of seven who died in a Quebec hospital this week. Ms. Echaquan had broadcast a Facebook Live video in her last painful moments; the video’s audio shares the racism she endured at the hands of people who were responsible for providing health care to her.

“The video that Joyce Echaquan shared on social media is heartbreaking. It is difficult for many Indigenous people to listen to the words shared on the video,” stated Grand Chief Garrison Settee. “Unfortunately for Indigenous people, we live with the reality that we may encounter racism when seeking medical treatment. We have heard that this is true right across Canada. Some people avoid seeking medical attention at all costs because they fear the racism they will encounter.”

One year ago, MKO responded to the release of a report from Quebec called The Public Inquiry Commission on relations between Indigenous Peoples and certain public services in Quebec: listening, reconciliation and progress (also known as “The Viens Report”). This report, prepared by the Commission d’enquête sur les relations entre les Autochtones et certains services publics, puts forward 142 recommendations regarding public services in Quebec.

“A full year after the release of the Viens Report, an Indigenous mother felt the need to livestream the treatment she received in hospital due to ongoing racism,” shared Grand Chief Settee. “The time for action is today. We have piles of reports that outline the ways in which Indigenous peoples face discrimination. Once again, I implore leaders across all towns, cities, provinces, territories, and at the federal level to continue working to take action and implement meaningful policies to impact Indigenous peoples in a positive way. Recommendations such as the 231 Calls for Justice from the Final Report of the National Inquiry into Missing and Murdered Indigenous Women and Girls must continue to be put in place. I encourage leaders in Quebec to start taking action to protect the lives of all Indigenous people across your province.”

MKO is aware that racism against First Nations people is an ongoing issue when they are seeking to access medical treatment. Any First Nations or Inuit citizens who feel they are experiencing racism while accessing health care in Manitoba can connect with MKO’s Client Navigator by phone at 204-677-1618, by toll-free phone at 1-800-442-0488, or by email at [email protected]

“Let us remember the children and husband of Joyce Echaquan. I want to wish them strength as they move forward through their grieving process,” said Grand Chief Settee. “I implore leaders at all levels to work together to ensure that Joyce Echaquan is not forgotten. We must absolutely learn from her experience to works towards making Canada a safer country for all Indigenous peoples.“