Treaty Five Territory, Thompson, MB – Manitoba Keewatinowi Okimakanak (MKO) Inc. is pleased to raise the MKO flag at the RCMP’s detachment tomorrow, June 21, during National Indigenous Peoples’ Day. This is a historic occasion as it will be the first time an Indigenous flag has been raised at this RCMP detachment.

“Despite the many difficulties First Nations have encountered in our relationship with the RCMP, we are focused on building a stronger relationship with the RCMP in MKO territory. I am pleased with the raising of the MKO flag at the RCMP detachment. I hope this will provide a strong signal to the Indigenous community in Northern Manitoba that the RCMP are open to working with us in a supportive way,” stated Grand Chief Garrison Settee. 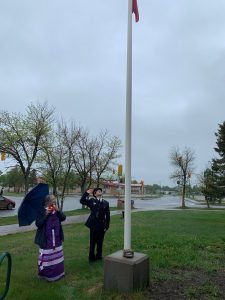 In recent weeks, the strained relationship between the RCMP and Indigenous peoples has been highlighted in media across the country. The MKO is determined to develop better relations with the RCMP in Northern Manitoba. The relationship is especially essential when it comes to carrying out the Calls for Justice set out in the

Final Report of the National lnquiry into Missing and Murdered Indigenous Women and Girls, which was released one year ago.

ommunities to work together respectfully to improve the safety of our communities,” stated Superintendent Kevin Lewis – Manitoba North District
.