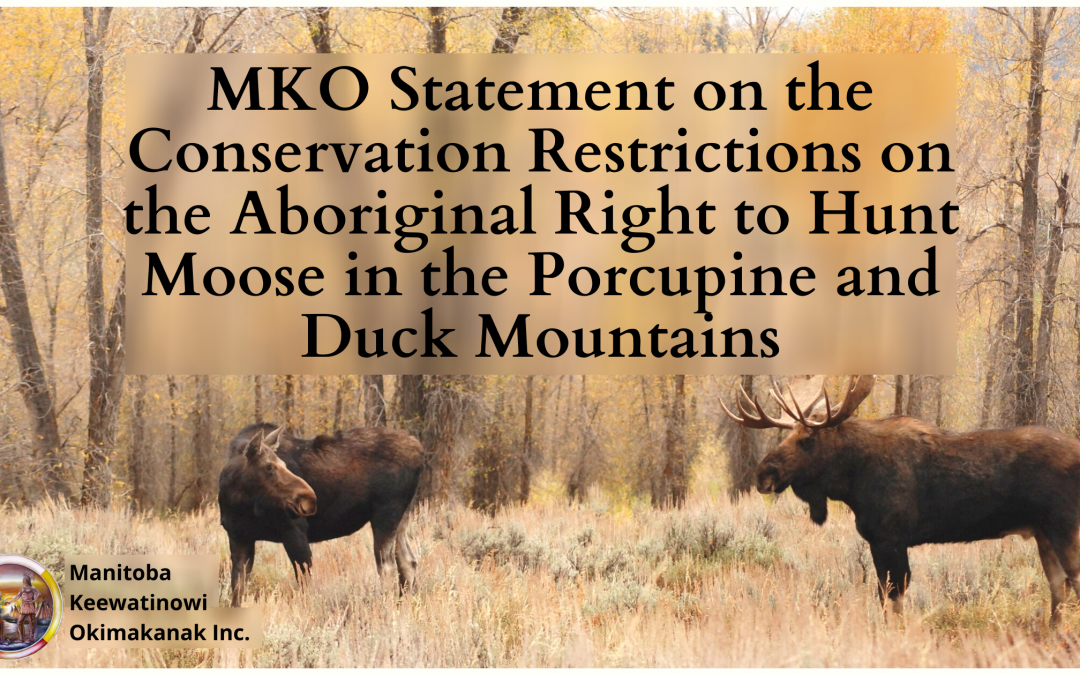 Treaty Five Territory, Thompson, MB – Manitoba Keewatinowi Okimakanak (MKO) Inc. is issuing a statement on the conservation restrictions on the Aboriginal right to hunt moose in the Porcupine and Duck Mountains (Game Hunting Areas 13, 13A, 18, 18A, 18B, 18C). MKO First Nations have an Aboriginal right to hunt game, including moose, as recognized and affirmed in section 35 of the Constitution Act 1982 and as determined by the Supreme Court of Canada. Further, paragraph 13 of the Manitoba Natural Resources Transfer Agreement, 1930 sets out the rights of First Nations to sustenance, subsistence, and food sovereignty and the obligation of Manitoba to ensure the exercise of such rights:

In the past, MKO First Nations people have been cooperative and willing to restrict their moose hunting based upon the common and collective interest of keeping moose populations healthy and in consideration of the continuance of the Aboriginal right to hunt moose in the future and for future generations. However, there has always been an obligation by the Government of Manitoba to consult with MKO First Nations on any conservation restrictions on the right to hunt moose under section 35 of the Constitution Act 1982 in any areas of the province, including the Porcupine and Duck Mountains.

“As the Grand Chief of MKO, I have the political mandate to protect the Aboriginal and Treaty rights of our member First Nations to hunt moose or carry out any of their traditional activities and subsistence rights. In more recent times, it has become a question of governance and the involvement of MKO First Nations in the decision making of resource allocations on a government-to-government basis,” stated Grand Chief Garrison Settee. “The Aboriginal and Treaty right to hunt moose by MKO First Nations takes precedence over the licensed rights of non-Aboriginal people’s right to hunt and the way this is implemented requires the Province of Manitoba to engage with MKO First Nation governments.”

Please note: Grand Chief Settee will not be available for interviews at this time.