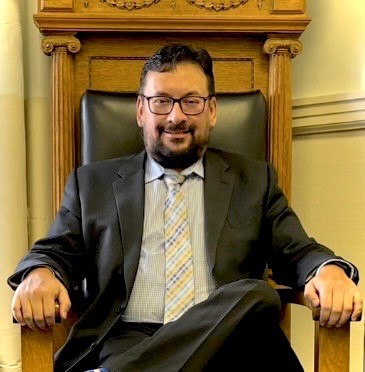 “On behalf of Manitoba Keewatinowi Okimakanak, I recognize and honour Vincent Sinclair, who was sworn in as a provincial court judge in Manitoba earlier this week. Mr. Sinclair is a member of the Opaskwayak Cree Nation who has been working as a lawyer in Northern Manitoba since 2010.

We know there is a need for increased representation of First Nations people working within the justice system. I commend Judge Sinclair for his ongoing efforts in the field of justice. Being appointed as a provincial court judge is a huge achievement and is a result of your hard work. Thank you for your service to the public in this area.

Judge Vincent Sinclair is a role model for other First Nations citizens who wish to pursue a career in the field of law. I’m very proud to know of MKO citizens who are achieving their dreams while making a positive impact on the world around them.”

Born and raised in the North (The Pas being his hometown), Vincent graduated in 1991 with a Bachelor of Arts in Sociology from the University of Saskatchewan. Vincent had hoped to try to complete his childhood dream of becoming a lawyer. That opportunity did not come to fruition until 14 years later in 2005.

While working for Opaskwayak, he helped organize and ratify several Specific Land Claims and the Treaty Land Entitlement Agreement signed in 1997. He also was elected to Chief and Council for one term, the Education Authority Board, appointed to the OCN Child and Family Services Board and lately to the OCN Government Services Board.

During his time with Prosecutions, Judge Sinclair was assigned to several court circuits out of The Pas, including Chemawawin, Misipawistik, and Mosakahiken Cree Nation.

While practicing law, he became involved as a Bencher with the Manitoba Law Society representing the Northern District. Judge Sinclair sat on numerous committees of the Law Society, including the Complaints Investigations, Access to Justice and Stakeholders Committees, and Regulating Legal Entities to name a few. Judge Sinclair was also appointed to the Manitoba Law Foundation and was a member of the Indigenous Advisory Council for both Manitoba Prosecutions and the Law Society of Manitoba. He was appointed as one of the Manitoba representatives for the Federal Judiciary Advisory Committee.

Mr. Sinclair brings years of experience of living in the North, working with surrounding First Nations, and collaborating with provincial and local municipal government representatives on many local projects and initiatives.