Treaty Five Territory, Thompson, MB – Manitoba Keewatinowi Okimakanak (MKO) Inc. is continuing to take steps to honour children from Northern Manitoba who did not make it home from residential schools.

On Monday, October 18, MKO Grand Chief Garrison Settee travelled with Elders to host a ceremony at a small gravesite where children from the Elkhorn Residential School are buried. The ceremony included music, prayers, a sacred fire, offerings, and a feast.

Elder Stan LaPierre led and provided guidance for the ceremony, which was inspired by a message brought forth by the late Elder Doris Pratt, who attended the Elkhorn Residential School as a young child.

“We came to have a ceremony to honour the young ones who were buried here, the ones that never made it home. Many of the children who attended this school were from the North.

As a representative of the Northern First Nations, I felt it was important that I come and honour the spirits of the children and have a ceremony and a feast to honour them and to remember them.

This has not been done for so many years, but I felt it is important that we do this, even though it may be after many years of the residential schools shutting down. It’s important we come in a good way to feast with them because they probably never had that kind of honouring and recognition until now. I’m glad that we did it. We did it for them. They were forgotten for so many years, but we decided to come and say, ‘you are not forgotten.’ 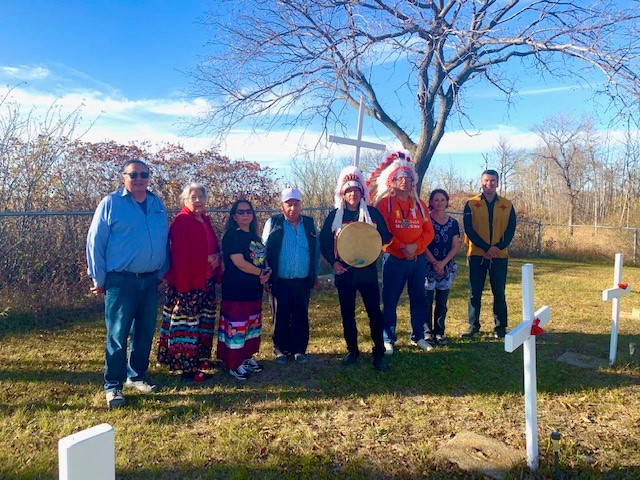 We wanted to come here to commemorate them and also feast with them with things we felt they would like. We were able to share berries, chocolate bars, and bannock with them. That is our tradition—the berries and the bannock—so we came with what they would like so it was special.

All the crosses at the graveyard where we gathered signify the lives of people who probably endured a lot of physical abuse and many kinds of abuses. They are buried with no names attached to the crosses.

It is sad there are no names attached to these crosses, but at the same time, I’m glad they preserved this cemetery in such a good way to honour them. In some way, there’s a dignity to their spirits when there are crosses and a monument there. It’s important those crosses and that monument is there.

We have the capacity to be able to come here and do ceremonies on behalf of everyone from the North. What we’re doing is not just for us; we are doing it on behalf of everybody in the North because these could be their relatives. These could have been their ancestors, so we come in their stead. It is worth the time and effort.” 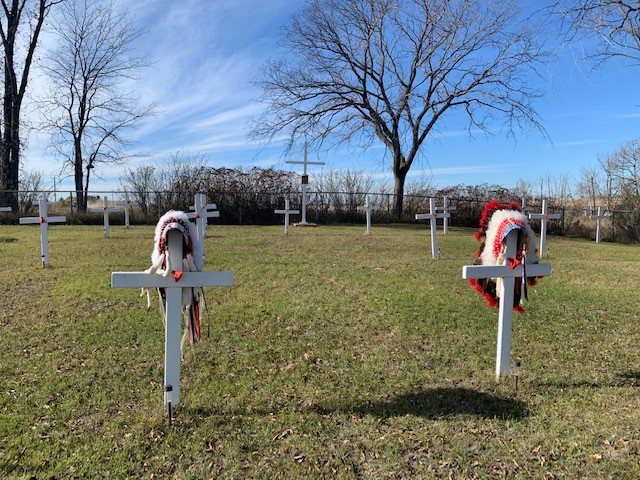 Grand Chief Settee expresses his appreciation to all the Elders who attended the ceremony on Monday, including Ken Whitecloud, former Chief of the Sioux Valley Dakota Nation, Rudy Okemaw, and Dr. Violet Okemaw. He also thanks Elkhorn resident Alecia Hoemsen for sharing her time and knowledge.

The gravesite where the ceremony took place is home to a monument that was erected in July 1990 by former school staff and students. In part, the monument reads, “In this consecrated plot of ground lie buried the remains of several children who died while attending the Elkhorn Indian Residential Schools.”

There are also unmarked crosses that have been erected in remembrance of the children who died.

The National Centre for Truth and Reconciliation has listed the following 26 names of students who died at the Elkhorn Residential School on their website:

*This derogatory name was shared in this way via the historical residential school records. This investigative news story takes a deeper look into this child’s true identity.